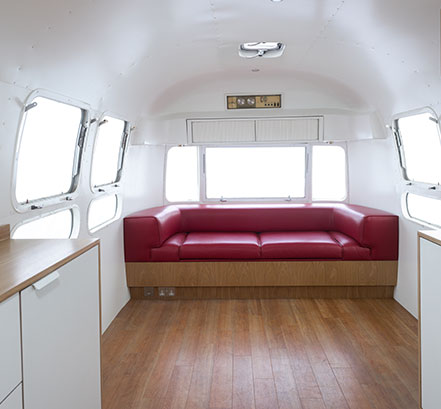 "Our project began in a vast empty warehouse in Watford. Our first live sighting of Airstream Sovereign LandYacht no T3I-O6J-3602; 'a travel trailer' completed 17-06-76 at Cerritos, California was in a space big enough to conceal an entire tank army. (pic). The 1976 trailer looked fine and dandy to me, because I didn't know what to look out for. All the windows were covered up with vinyl and the interior had several tons of chipboard shelving lining the walls pretending to be record racks. The Airstream had seen hard service at music festivals on behalf of Three 'the mobile phone company made for the internet'. It was no longer needed on the festival circuit and was going for a song. More about that later. Being parked indoors meant you couldn't see any sign of leaks.

ARC Airstream's response to our enquiry was by some margin the most responsive and convincing of the people we contacted. They had the right questions and answers.

We met with Kathy and Darren. It became clear immediately that with this particular Landyacht we had almost certainly bitten off more than we could chew.

It also became clear that as far as Darren and Kathy were concerned, none of this presented a real problem. It was all certainly do-able and probably even worth doing. It was a relief to be in the hands of people who clearly knew what they were doing and were rather good at it. At the time of our project there were different cost options available from ARC. From modest to luxury. We wanted quality and economy. Our concerns were taken seriously and we were assured about meeting our particular budget, which has been pretty much adhered to. Quite a lot of the parts and materials have been salvaged and restored from other projects.

Our idea was to convert the vehicle back to something at least respectful of the original principles. There would be a kitchen galley, a wetroom/bathroom, a pair of bunks behind sliding doors, a rock and roll bed/sofa and a bit of storage, As usual with us, there would be an exotic foreign boiler and invisible underfloor heating, but above all there would be the luxury of space. This is somewhat at odds with the norm, as most of the other Airstreams we've since come across are packed so tight with 'stuff' that moving around inside is something to think about before doing.

There would only be a few materials used. Matt white aluminium for the walls, oak faced ply for the cabinets, oak veneer for surfaces and white laminate for the door fronts. White Corian for the bathroom, with a cedar duckboard over a stainless steel shower tray. Stainless steel for switches. Both 240v and 12v.

Darren and Kathy were pretty receptive about our ideas and very good about how to achieve them technically. They were rightly critical too, when we went off track. It's obvious to us now, but wasn't so much then, that weight and weight distribution is a significant design consideration. Material stability was an issue. We know from experience that a simple modest aesthetic is both difficult and expensive to achieve. Kathy coined our project 'the minimal airstream'.

The finished product is better than we could have expected. It is conspicuously plain. The look is pretty austere and the detailing quite robust. The process was fun all the way.

Contact the ARC team to find out how we can help with your renovation project.